Around the world, there are many examples of quarry and mine restoration. Open cast mines have become lakes, wetlands or woodlands. Gravel quarries have become botanical gardens or parks. Often rare species, including birds, insects and plant life, have been brought back. The restoration process frequently has to overcome many challenges, including generally the area having no top soil. Sometimes the site is contaminated with toxic mining residues.

Over the last decade Ngā Uruora has been doing its own small scale quarry restoration. It has been restoring an abandoned rock quarry on the Kāpiti Coast. This quarry had provided material for the railways and for the construction of the coast highway. Luckily it is not a toxic site. But it certainly did not retain much top soil. In addition, it is exposed to wind, salt spray and all day sun.

Until Ngā Uruora gained a ‘right to occupy’ the KiwiRail escarpment in 1997, the abandoned quarry had slowly been reverting to a weed infested site. There was not only no weed control there was also no pest control.

The original Ho Chi Minh trail to the quarry

Access to the site was dramatically improved with the building of the Escarpment Track section of the Te Araroa trail.

Beginning to tackle the weeds

The cape ivy was not only covering the main part of the quarry it was creeping up the steep sides of the quarry and working its way into surrounding bush. Clearing this was beyond the resources of our group. Luckily Greater Wellington Regional Council came to our aid. They brought in spray guns and a tanker and did the initial clearing of the cape ivy.

This was followed up for a number of years by spraying from backpacks and hand weeding. Much of this was carried out by volunteers, notably Ken Fraser, or our own contractors.

In tandem with weed control, planting began. Initially this was to fill gaps within existing forested areas and to slowly expand these areas. These first plantings were based on our standard set of pioneer species including ngāio, taupata, karamu, akeake, olearia solandri, cabbage trees, two sorts of hebe, tauhinu, five finger, wharangi, mānuka and kānuka.  Most of these plants have been grown by Ngā Uruora using eco-sourced seeds.

However, over time we have been adding a range of secondary species including some plants that have been rare or missing from the escarpment. In recent years we have added small numbers of: totara, titoki, matai, large leaf milk tree, northern rata, nikau and kahikatea (in a small area where it is damp year round). In addition, kohekohe are beginning to spread naturally into the bush areas.

Along the edge of the quarry runs a small stream. Along the lower section of this stream we have been planting toetoe and carex.

Recent planting in the quarry

The quarry is very dry in summer. In order to establish new plantings, at times watering can make the difference between getting plants through their first years and losing many plants. A water tank has therefore been installed in the quarry. This is mainly filled from rainwater collected via sheets of iron. In really dry conditions this tank can also be filled from the stream. The tank is also used as a source of water for spraying.

The better access provided by Te Araroa allowed pest control to be extended into the quarry. Initially, this consisted of DOC200 traps along the track. In recent years, other traps and bait stations have been added. In the north end of the quarry, which contains most of the bush, traps and bait stations are set out at approximately 100 x 100 metre spacing. This is to control both mustelids and rats with a primary aim of protecting bird populations.

With a better understanding of how the quarry supports lizard populations (see next section) pest control has been increased in the south end of the quarry. This has involved placing additional traps and bait stations on the site as well as adding four Goodnature A24s traps. On the flatter part of this area, traps are approximately at 20 x 20 metre spacings. Part of this new network is designed to control mice.

Ngā Uruora is also trialling remote sensed traps in the quarry. This means catches can be quickly retrieved and autopsied by Sue Blaikie, a local Kāpiti Coast veterinarian, to ascertain what they are eating.

Traps and bait stations in and around the quarry, Trap.nz 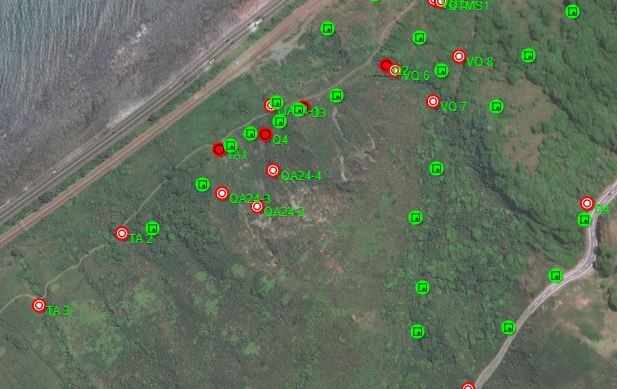 A bait station at the quarry 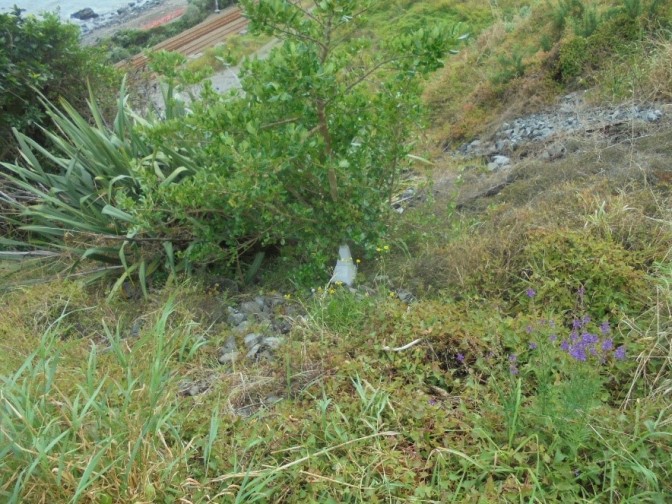 There is a network of tracking tunnels on the northern end of the escarpment and a couple of these are in the quarry. However, the numbers are too small to accurately assess the efficacy of the pest control. As yet, no bird counts have been carried out in the quarry.

In 2016 Ngā Uruora began to become aware that the quarry was potentially a good site for lizards. Informal investigations using onduline and tracking tunnels, as well as some day searching, indicated a presence of lizards. These early investigations indicated Raukawa gecko Woodworthia maculata and Northern grass skink Oligosoma aff. Polychrome Clade 1a living in the quarry, particularly within the scree slopes.

A formal survey was carried out by Ecogecko in summer 2017. This used a variety of methods, including pitfalls. This survey identified two further species, Copper skinks Oligosoma aeneum and Brown skinks Oligosoma zelandicum. Brown skinks are classified as ‘At Risk – Declining’ by the New Zealand Threat Classification System.

These lizard surveys have helped Ngā Uruora begin to develop plans for the next stage of the restoration of the quarry.

There remain parts of the quarry with potential for further planting of pioneer forest species and rarer forest trees. There also needs to be continuing weed control across the whole quarry. Banana passionfruit and periwinkle remain significant problems. However, it is hoped cape ivy will be eventually eradicated.

The greater understanding of the importance of lizards will influence further restoration work.

Protecting and supporting our lizards

There is potential to restore the flat land at the south end of the quarry through which the Escarpment Track runs. This is currently covered in a mix of gorse, tree lucerne and grass. It may be possible to also undertake some restoration of the lower parts of the scree slopes. Removing the grass could help control mouse populations.

Gorse and tree lucerne in the quarry 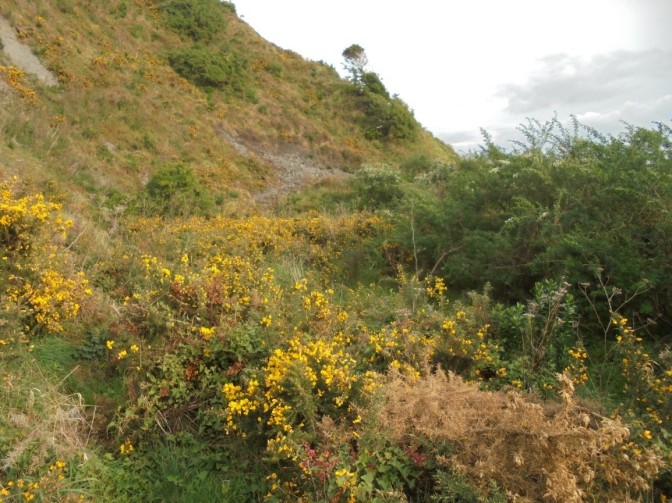 Ideally, a number of plants that support lizard populations that are either rare or currently absent from the escarpment will then be planted. The plants should include Cook Strait mahoe (Melicytus crassifolius), Melicytus obovatus, Comprosma rhamnoides and speargrass (Aciphylla squarrosa). Other more common plants such as pohuehue (Muehlenbeckia complexa) and mingimingi (Coprosma propinqua) could also be planted.

View all posts by Admin